Racing to the clouds

A first-timer's adventure on Pikes Peak.

Written by:
Joseph Burtoni
Published on:

It’s 3 am and Claire De Lune by Claude Debussy is playing from my phone across the room for the fourth time this week. No it’s not Groundhog Day; it’s the 100th running of the Pikes Peak International Hill Climb. I’ve got a few moments to drink a large glass of cold brew, throw on my clothes, grab my camera bag, head to the car, and follow my girlfriend up the 14,000-foot mountain before the gates are closed and the road is open to the racers.

This is my first time photographing the event while it’s Katie's fourth—she’s a seasoned pro at this point and I’m basically there to carry camera bags and extra layers of clothing. Even though it’s the middle of summer, it’s cold and snow (especially at 13,000+ feet) is still very common.

I’m embarrassed to say it, but while I’ve been into cars and motorcycles my entire life and lived in Colorado for a solid 10+ years, this was the first time that I’ve ever attended the so-called race to the clouds. 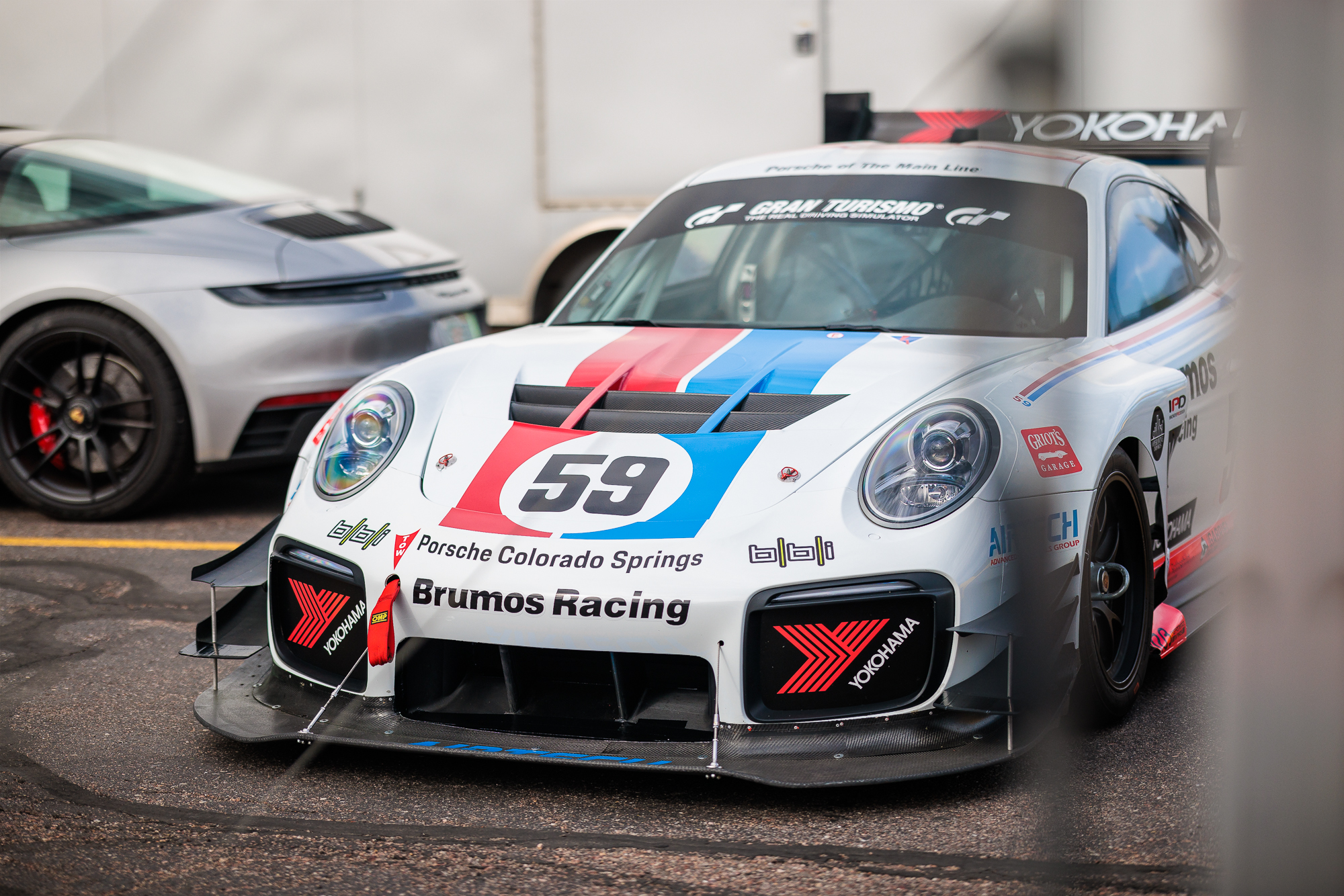 It’s an experience that’s hard to comprehend and one that I’ll never forget. 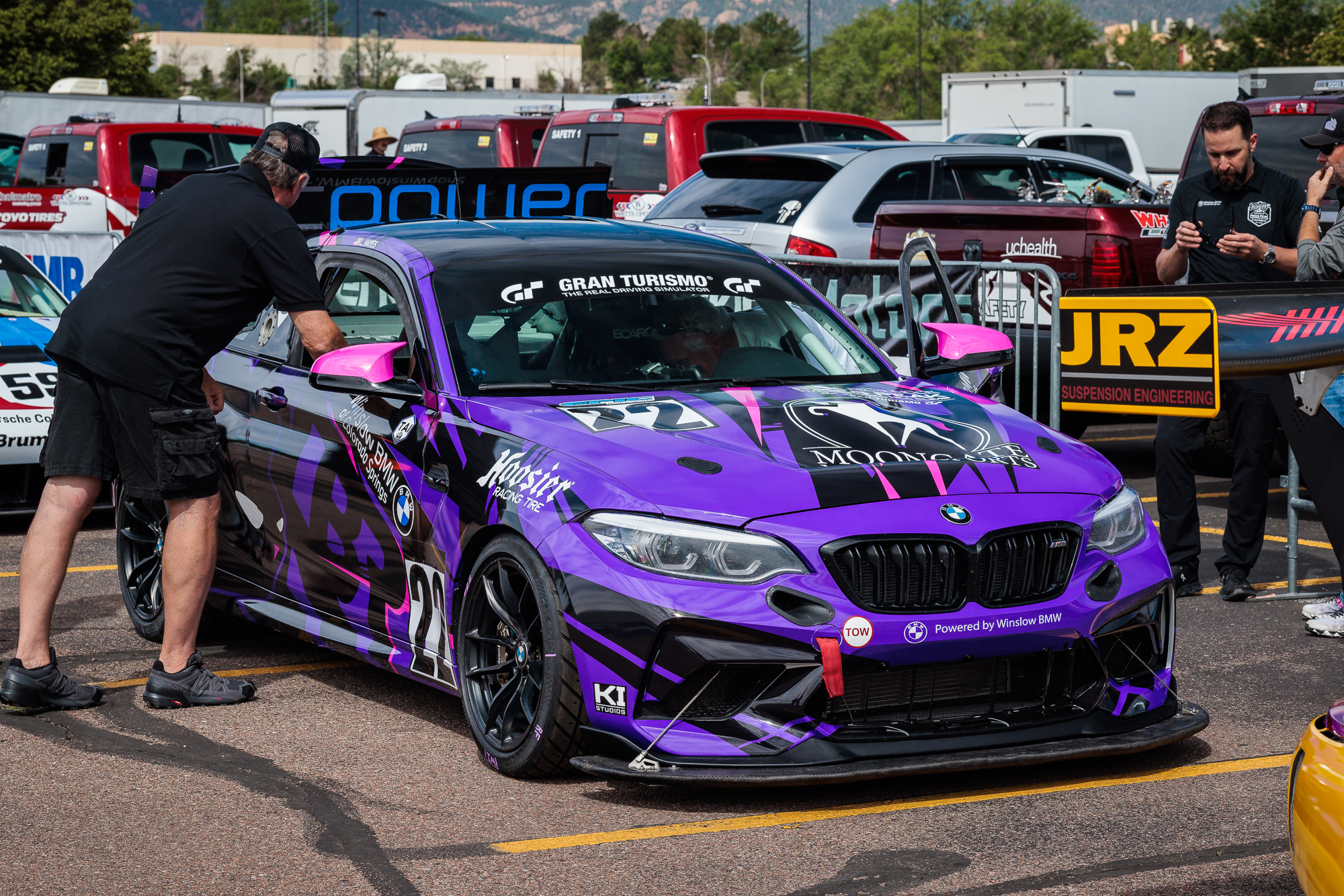 To start the week off there was scrutineering where everyone who will challenge the mountain had to be inspected. The infamous Pikes Peak International Hill Climb has claimed its fair share of victims over the years and there are hundreds of checks to ensure the vehicles are in the safest condition for their drivers. While a normal scrutineering usually happens at a track, this happens at a convention center because the Pikes Peak National Forest parking lot doesn’t have the space.

More Porsches, Mustangs, M Cars, Audis, and others that I can count. I was overwhelmed. I chatted with the famous Larry Chen as Ken Block and his team unloaded the Hoonipigasus, which added to the overwhelmed-ness of the day. Still, I was more than ready to head up the mountain to see what these race cars were capable of.

The next few days were early mornings fueled by coffee and adrenaline. Out the door by 3 am every morning, driving up Pikes Peak in pitch black darkness 45 minutes later, parking and then running to your spots to photograph the drivers by 4:15 am for their practice. Once everyone on a single segment turns around to head down, the photographers have 10ish min to run to their next spot before the drivers are on the track again. And when the sun comes out, they’ve got one or two more attempts at their daily segment before it’s time to shut down the practice for the day. The road to the top of Pikes Peak Mountain opens up at 9am for tourists to drive-up at 15mph, and the race cars are safely put into their trailers on the way down the hill for adjustments. 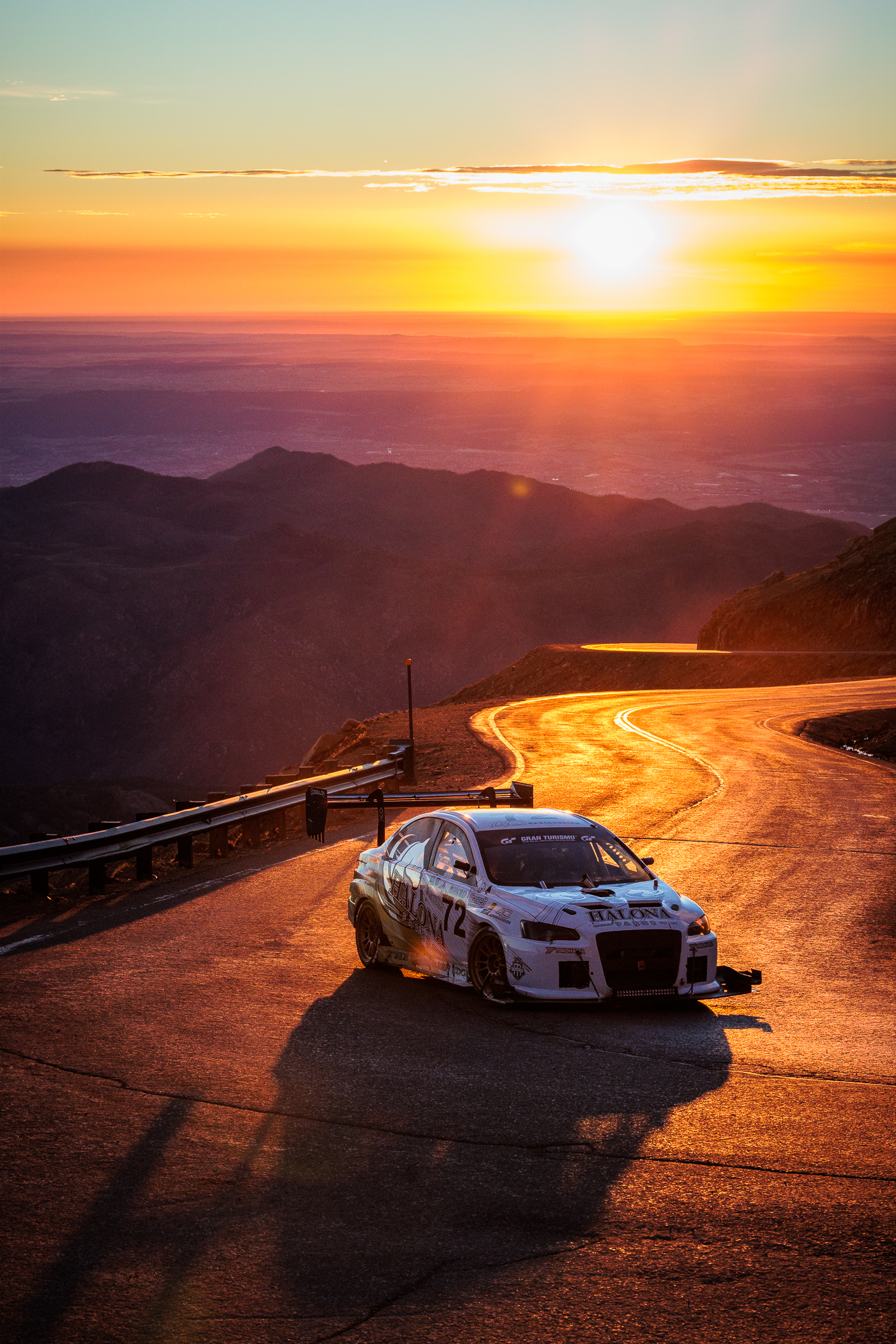 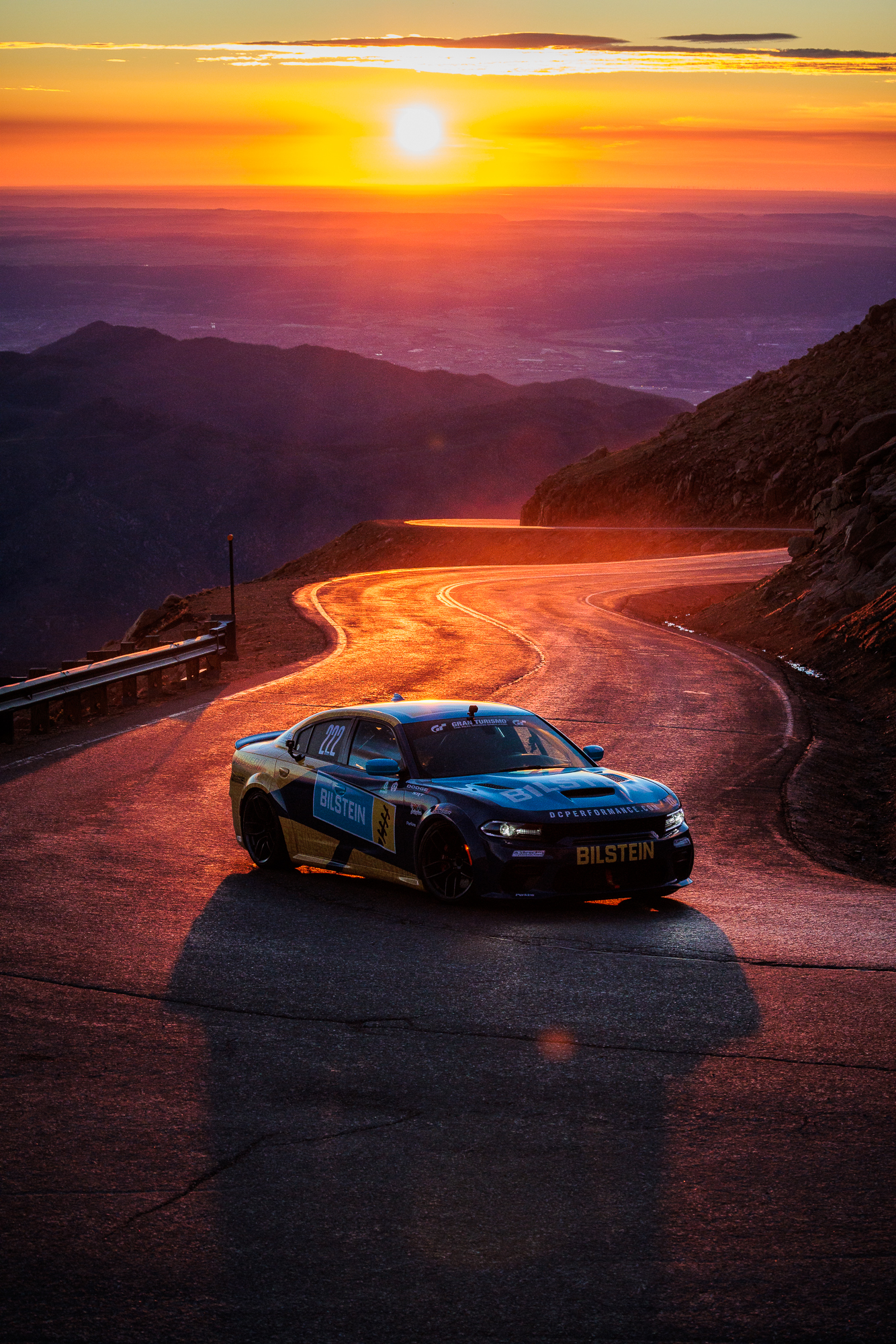 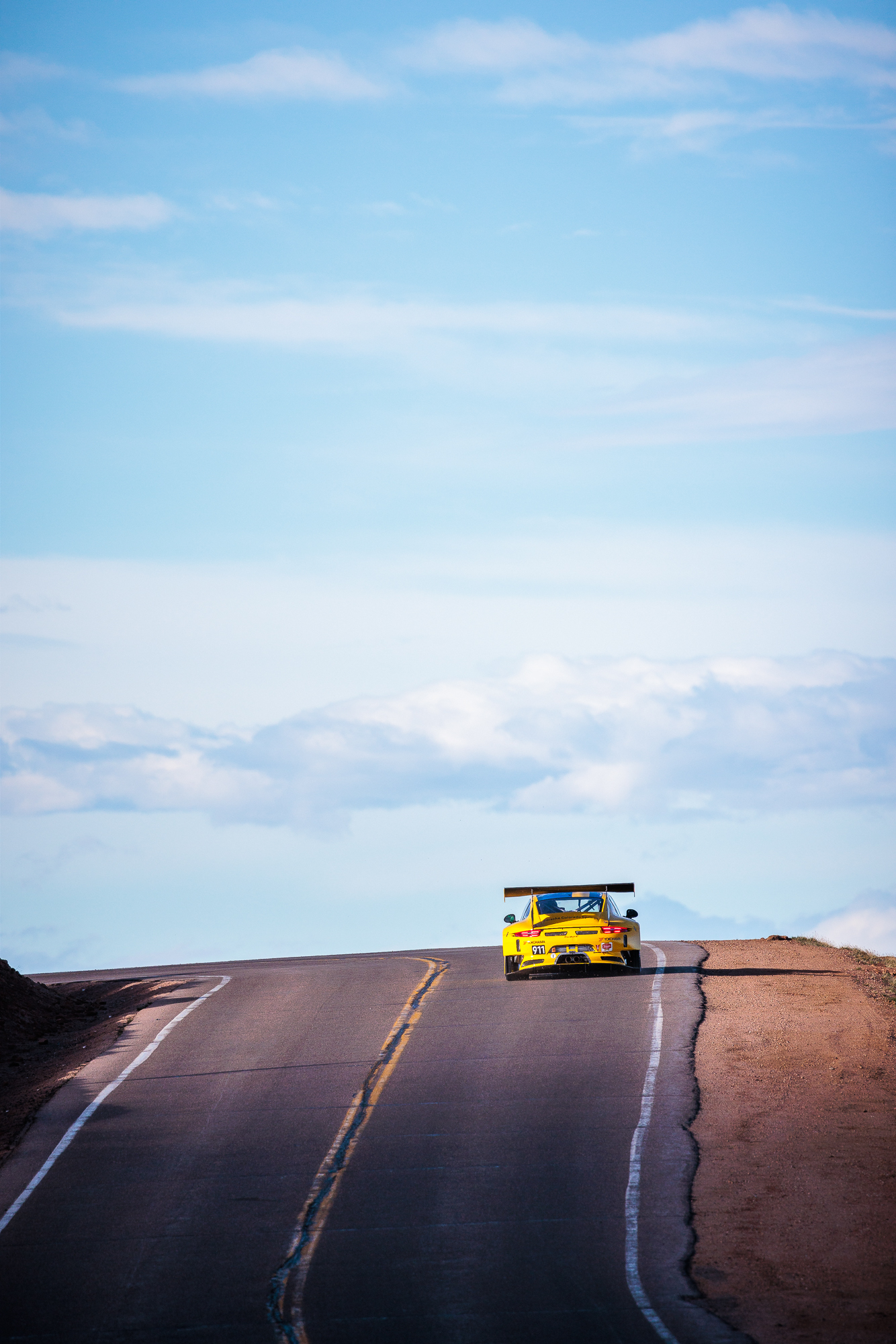 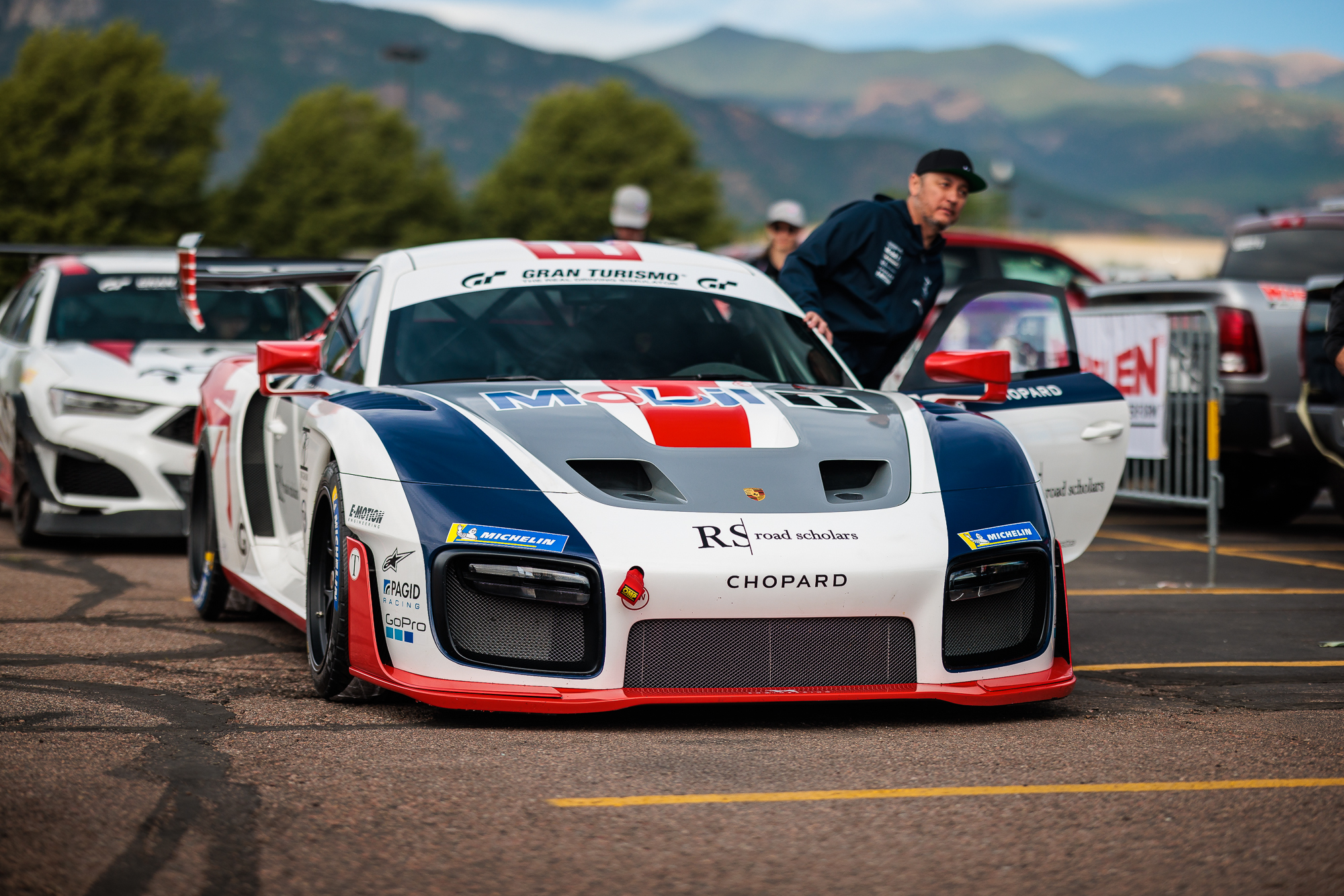 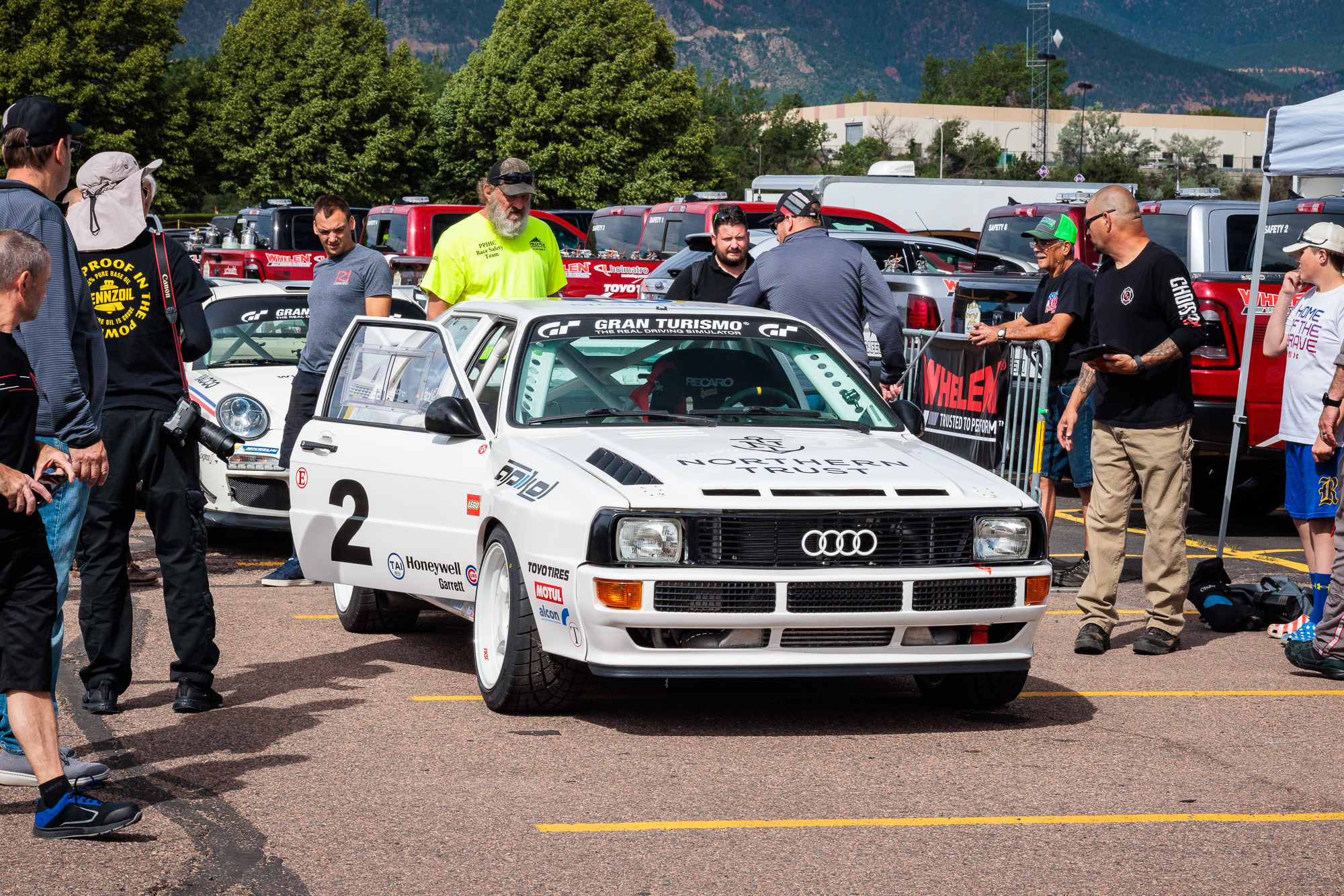 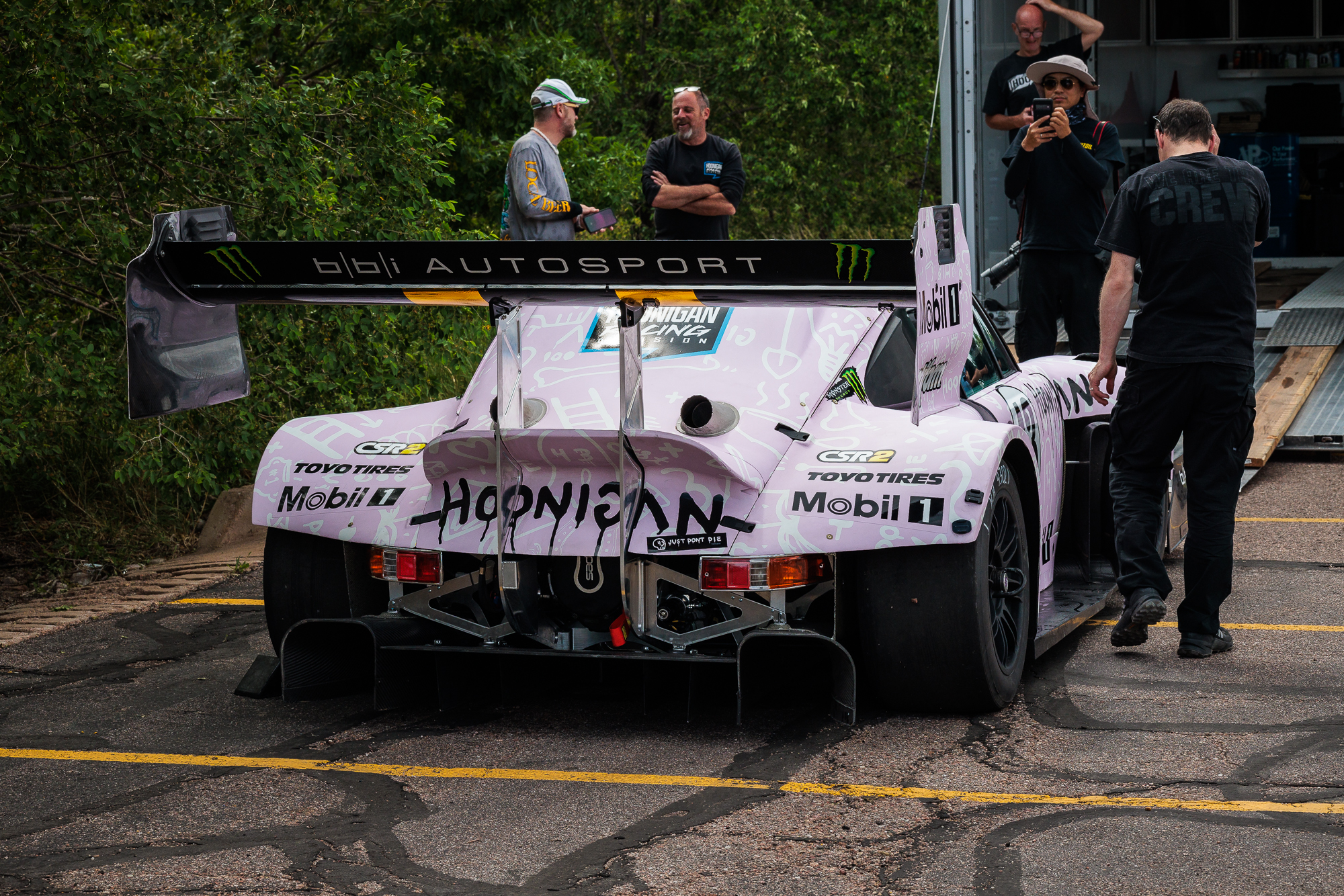 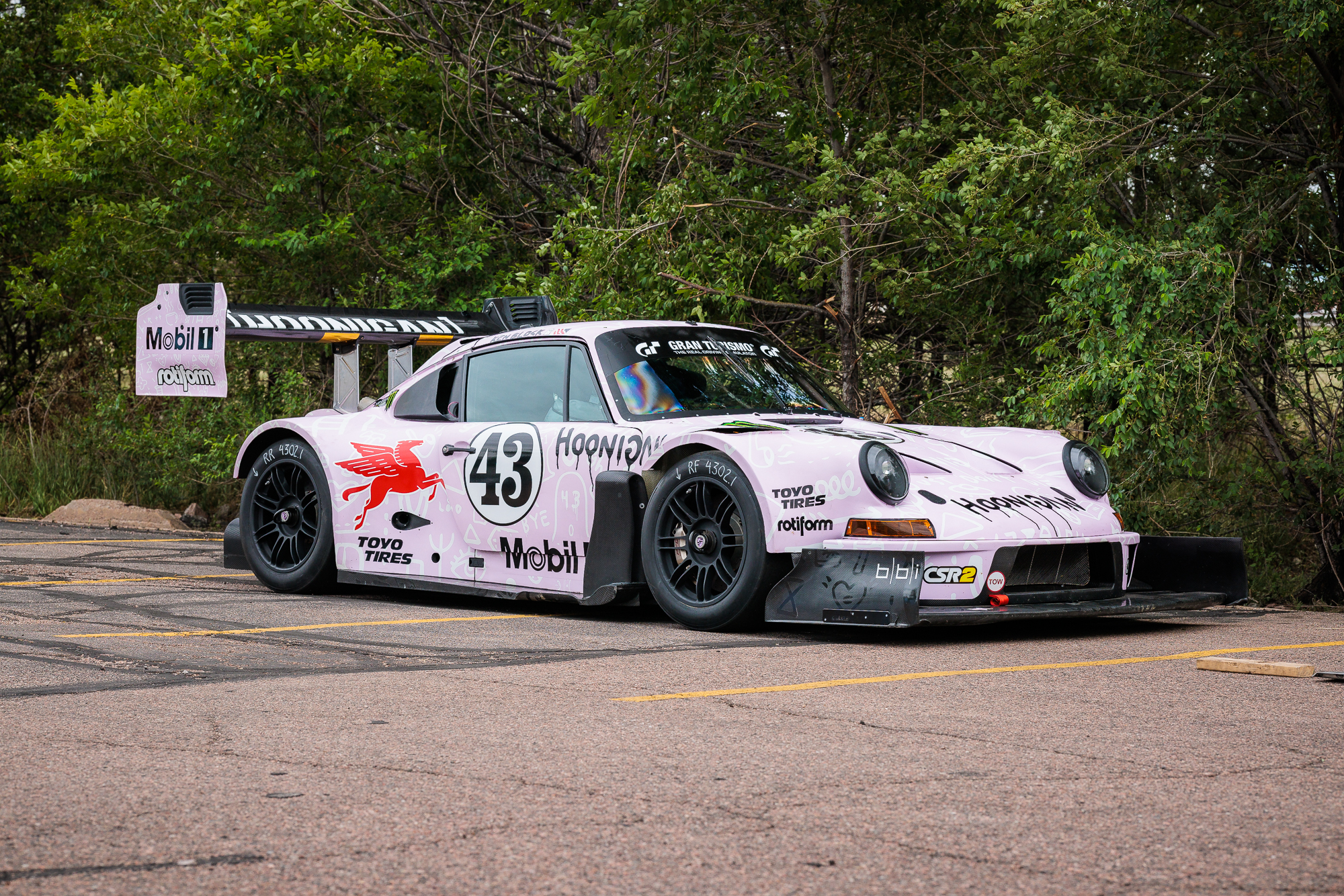 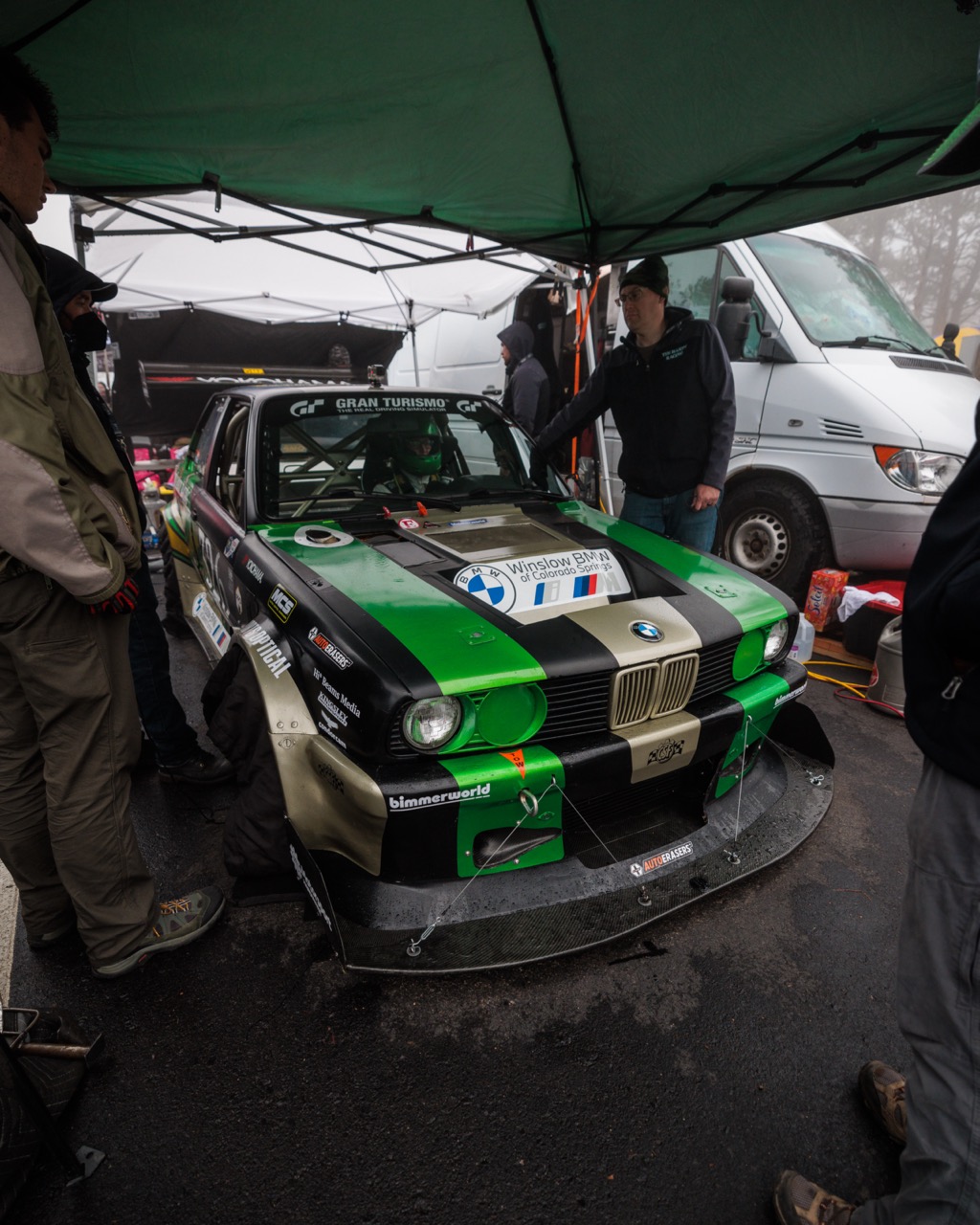 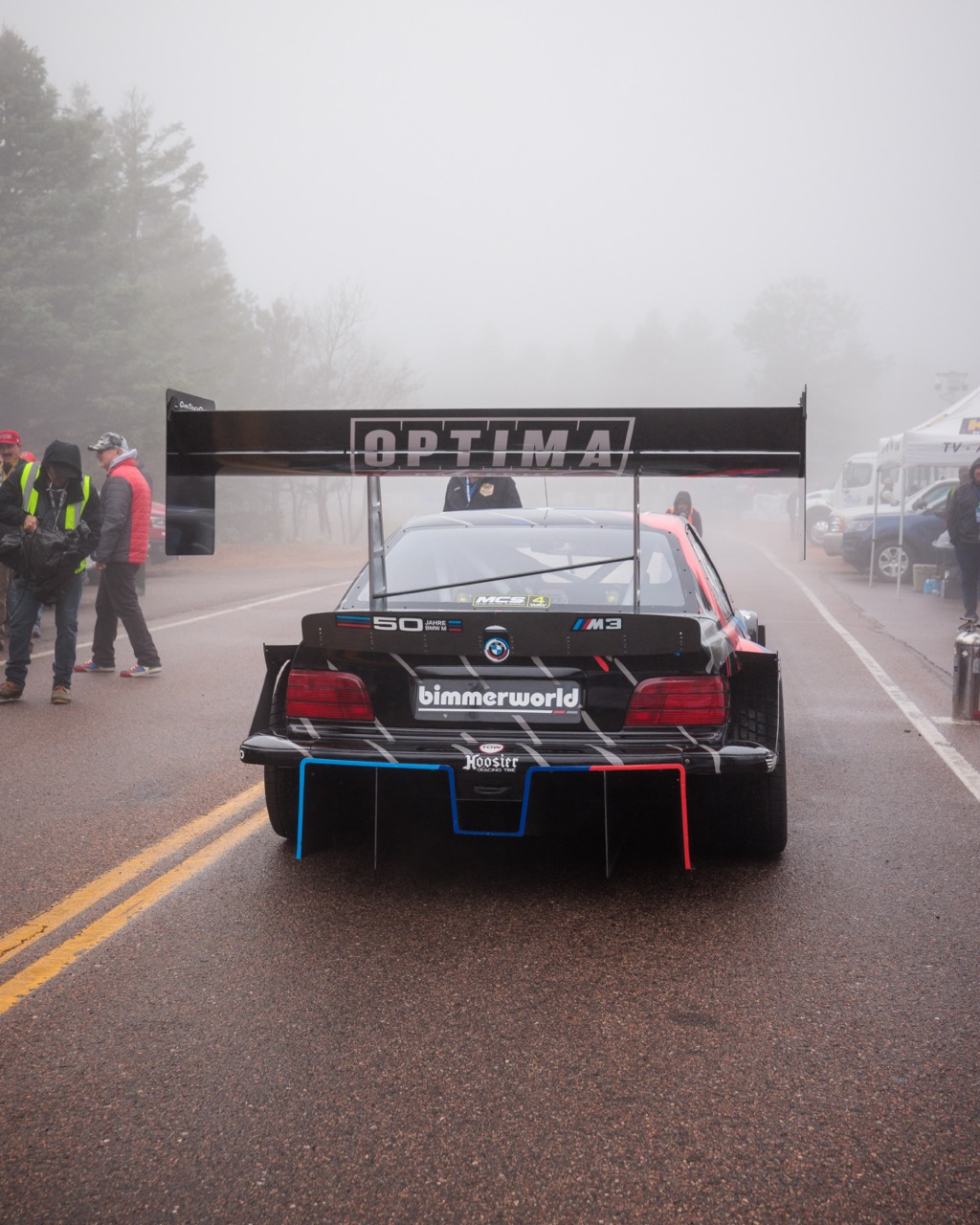 We headed down with everyone else and usually grabed breakfast with the team we were capturing over the weekend, in this case the extremely talented Laura Hayes. After breakfast, Katie and I would grab more coffee and edit photos for the next eight hours until it was time to think about dinner and going to bed to do the whole thing the next day. And we did this on different parts of the course for the next four days straight.

As for the race, we had to be on the mountain by 11:30 pm the night before—the gates open up at 1 am for us to rush up the hills. My mother was nice enough to lend us her Ram Promaster camper so we got a pretty good night of sleep and—more importantly—a place to make coffee in the morning. There is no movement allowed on the track during the race; you’re basically stuck wherever you get to the night before. Katie had an event the afternoon of the race in northern Denver so we decided to stay at the pit/start line to capture the day. But Sunday was the hardest one to capture because the weather had taken a turn for the worse. It was foggy, it was cold, it was raining, it was terrible. No records were going down that day. We jumped back and forth between Laura’s trailer and the start line to watch some of our favorite drivers head up the mountain.

In between that, we were talking to friends that we made during the week, trying to stay warm anyway that we could. Laura made her way to the starting line and was off to face the mountain in the worst conditions of the week. She ended up making the drive in 12:07.951 which is a solid time, but like any racer not fast enough for her.

It was a an amazing week full of early mornings, thousands of clicks of a camera, nearly losing my footing on a rock face with a small fortune of equipment, and so much more. But I can definitely say that I’ll be back in 2023. It’s an experience that’s hard to comprehend and one that I’ll never forget.